Last evening I had a WebEx session with Tintri in which they told me about their “VM only” storage appliance VMstore and I must admit that I’m impressed with what they have to offer. I have not yet had the opportunity to test this appliance, all info in this blog post is from the WebEx session and documentation provided by Tintri.

It’s an easy to install storage box that comes in only one configuration: 8.5TB of usable data. In the box is a mix of SATA disks of flash disks. The storage is offered to your VMware environment as one big NFS datastore. By moving data back and forth from SATA to flash, VMstore will eliminate storage performance bottlenecks.

What’s under the hood?

The idea of the VMstore is that you no longer carve your storage into different volumes, LUNs, raid-configs, etc. You have just one big volume that is presented as one single datastore to your VMware infrastructure. Having just one single datastore and no LUNs with different performance characteristics, eliminates a lot of storage configuration and management.

What VMstore actually is doing is moving your data from slow rotating disks into super fast flash storage. Moving ALL of your data to flash would be very costly, so they use the flash storage as cache, but a rather big cache. Contrary to other vendors, VMstore uses the flash for read and write, not just read.

To make optimal use of the flash cache, all data that is moved into cache is compressed and deduped. Where other storage vendors use 64K blocks of data to move into cache, VMstore uses only 8K blocks, making it possible to more precisely address the data that should be moved to cache. Tintri says their hitting cache for 97% of all IOPS in production environment.

Of course the flash and 16 SATA disks are protected by RAID, which is a RAID6 level, but for your storage workload, you don’t need different RAID levels.

Another technique they are using, which will be announced soon, is auto-alignment. Yes, that is correct; VMstore will automatically align all those VMDK’s that you place on the VMstore. This is a feature I would welcome very much, not even for all the performance gains it would bring to VMstore, but for all those VMs that are still on my to-do list that need re-alignment. Maybe I can ‘test’ a VMstore appliance for a week and storage VMotion all my VMs back and forth between my current storage and the VMstore.

Since there is just one big volume there is no option to differentiate between Silver, Gold or Platinum performance levels. The only influence you have on the performance of a VM (or single VMDK of a VM) is to pin it to the flash cache. Say a VM with a database running inside, is running for a few days and the most used parts of that VMDK have been moved into flash, you can now pin the VMDK into the flash storage. From now on the data blocks of this VMDK that were in flash, will remain in flash even if in normal use VMstore would start moving those blocks back to the SATA disks. Any extra blocks of this VMDK that are moved from SATA to flash, will also be kept in flash for as long as the VMDK is pinned.

The goal was to create storage that would need hardly any management and indeed, all the management you have on the VMstore is decisions on whether to pin or not pin a VM into your flash cache and maybe some day replace a disk.

VMstore has a very intuitive web interface in which you can quickly see how your storage is performing. Again, performance is key here, so the view that shows you how much capacity is left, is telling you about “Performance reserves”. 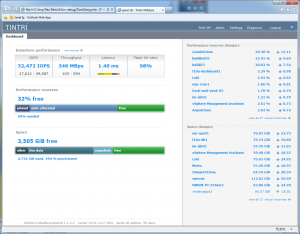 A very powerful tool is seeing the latency at VM or VMDK level. In just a few clicks you can see how your VM is performing. Normally you had to first check at storage level what LUN was having high latency, then find out which VMs are running on it and try to figure out which one is the one with the high latency. No more need for that, just open the VMstore web interface. 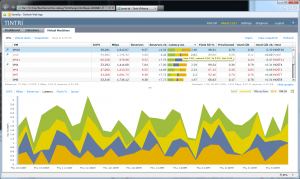 VMstore is aiming at enterprise customers, since you need to have a certain workload on your storage before you’re running into performance bottlenecks caused by storage configurations. A small environment with just a few IOPS and looking for a lot of room to store data is not the customer that will benefit from a VMstore.

To give you an idea what Tintri is aiming for: They claim a VMstore can outperform an EMC Clariion with 250 spindles. Right now Tintri is testing the VMstore with 65/35 R/W workloads and claims to be able to hit a 50.000 IOPS.

After listening to the presentation and discussing some topics, there remain some points that should be improved I think.

Overall I very much liked what I saw. Of course I can’t comment on performance at all, but the presentation convinced me that VMstore will lower the cost of implementing and managing your storage, if VM storage is the only storage you need.

The view on latency at VM and VMDK level and the auto-alignment are fantastic. The complete absence of difficult storage management is a big big plus for the VMstore.  I think with the coming new version of the VMstore, it will be a real Enterprise ready device.