Second difference between real world and KB is that you will need to reconfigure your vCenter networking, but there is no mention of that in the KB. Below is the procedure I followed IN A LAB ENVIRONMENT when testing the upgrade for a customer of mine.

When upgrading to heartbeat 6.4 and switching to “non-identical” nodes, you’ll need new server names and an extra public (passive) IP address for your primary and secondary vCenter.

Following the first steps of KB 2002112, shutdown vCenter Heatbeat on both servers leaving the applications running. Do this through the VMware vCenter Heartbeat Management console. 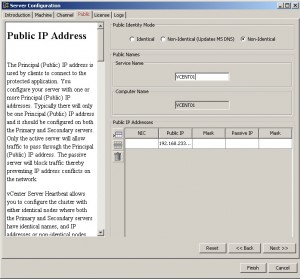 Re-enter the “Service Name”. In my case this is “VCENT01”. Steps 4 and 5 tell you to assign the Principal Public IP and the passive IP in step 7. When entering the correct IP addresses, you will run into a problem later on after removing the secondary server from the domain and trying to re-add it. The Windows network stack is not update with the configuration change in IP you make here. To solve this set the IP on the network interface to 192.168.233.30. Then use this as the passive IP address and keep 192.168.233.10 as the public IP address.

After you completed these steps, make sure your VMware vCenter Heartbeat is running fine again. You might need to wait some time for the file sync to complete. After everything is running smooth again, the next step is the upgrade itself. This is a fairly straight forward procedure, outlined in KB 1014435 titled: “Upgrading vCenter Server Heartbeat from an earlier version to a later version”.