There was a good discussion on twitter on memory overcommit and the value of memory overcommit and whether you should or should not use it in production. What struck me in this was that on a subject like this, there is so much misunderstanding although there is a lot of documentation available that can explain the subtle difference between good and bad overcommit of memory.

In short: When you assign more RAM to your VMs than available in your host.

A simple example:
Host has 48GB of RAM and just for the sake of argument we’ll pretend the hypervisor doesn’t use any RAM and we don’t have memory overhead per VM. I now start loading it with VMs that have 4GB RAM assigned. Without any memory overcommit I can load this host with 12 VMs of each 4GB.

– Overcommit is always a performance hit

– The gain by overcommitment is neglectable

Transparent Page Sharing (TPS) is a performance hit
The mechanism below memory overcommit is called Transparent Page Sharing (TPS). Using this technique ESX scans if pages in memory for one VM are identical to pages of another VM by using hash values and if they are ESX doesn’t store that second page in physical memory but just places a link to the first page. When the VM wants to write to that page, then the link is removed and a real page in physical memory is created. This technique called Copy-on-Write (CoW) will incur an overhead compared to writing to non-shared pages.

What is transparent page sharing

The scanning of the guests performed by the hypervisor is done at base scan rate specified by the “Mem.ShareScanTime” which specifies the desired time to scan the VMs entire guest memory. By default ESX will scan every 60 minutes, but depending on the amount of current shared pages, ESX can intelligently adjust this scan frequency. 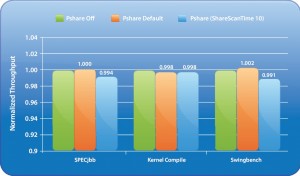 Overcommit is always a performance hit

To be short, no it is not. But you probably expect more from me than just this. Let’s be clear about doing bad overcommit which is always a performance hit. As soon as your ESX hosts is out of physical RAM and starts swapping to disk, there is a big performance hit which should be avoided at all costs. Scott Drummonds (VMware) recently wrote about using Solid State Disks in your SAN to be used as swap space for your ESX host (http://vpivot.com/2009/12/24/solid-state-disks-and-host-swapping/), which would make less of an issue but still there is a performance hit.

But with good overcommit the performance hit is very low as you read in the previous section. There is also a fase in between good and bad overcommit and that is when your good overcommitted host is getting low on free physical memory. When this situation occurs, ESX will start looking for unused but claimed memory by the VMs and will try to reclaim memory by using a technique called ballooning.

Impact of ballooning on performance

The conclusion to draw from this, is that the performance impact of Transparent Page Sharing and ballooning neglectable and memory overcommit is NOT a performance hit !!!

Let’s move on to the remaining misconceptions on memory overcommit.

Real world workloads don’t benefit.
A common misconception is that TPS and ballooning will not work for the majority of applications. I have done a lot of searching for problems with applications in a virtual environment that could lead back to TPS or ballooning but could only find two situations in which there is a “problem” with TPS or ballooning. One situation is when running a Java application.

Copied from Scott Drummonds website:
“Java provides a special challenge in virtual environments due to the JVM’s introduction of a third level of memory management. The balloon driver draws memory from the virtual machine without impacting throughput because the guest OS efficiently claims pages that its processes are not using. But in the case of Java, the guest OS is unaware of how the JVM is using memory and is forced to select memory pages as arbitrarily and inefficiently as ESX’s swap routine. Neither ESX nor the guest OS can efficiently take memory from the JVM without significantly degrading performance. Memory in Java is managed inside the JVM and efforts by the host or guest to remove pages will both degrade Java applications’ performance. In these environments it is wise to manually set the JVM’s heap size and specify memory reservations for the virtual machine in ESX to account for the JVM, OS, and heap.“

The second exception I found is not really a problem but only something to keep in mind when working with the newer type of CPU’s that can do Virtualized MMU. Read this post from Duncan at Yellow-Bricks: “Virtualized MMU and Transparent page sharing” http://www.yellow-bricks.com/2009/03/06/virtualized-mmu-and-tp/. In this post Duncan explains that when using large pages (2MB) in combination with a CPU that uses virtualized MMU “the ESX page sharing technique might shares less memory when large pages are used instead of small pages“ and “When free machine memory is low and before swapping happens, the ESX Server kernel attempts to share identical small pages even if they are parts of large pages. As a result, the candidate large pages on the host machine are broken into small pages. This can degrade performance at a point in time when you don’t want performance degradation. Keep this in mind when deploying VMs with virtualized MMU enabled, make your decision based on these facts! Do performance testing on what effect overcommiting will have on your environment when virtualized MMU is enabled.“

Second Conclusion: Workloads being not compatible with TPS or ballooning:

– Java is the only known application that can have a performance hit when ballooning kicks in.

– When using V-MMU compatible CPU’s in combination with large pages a performance degradation can be expected when ballooning kicks in.

The memory gain by TPS is neglectable

How much memory would you expect to gain from using TPS? Keep in mind that TPS works at page level, not only between VMs with the same Guest OS, but across all Guest OSes. Not just over VMs but also within the same VM. You could theoretically already save memory through TPS with just one VM running on your host.

Looking at real world examples provided me by a number of people running ESX in production, it is clear that TPS saves a lot of memory. See the table below:

– As the table shows, memory savings thanks to TPS can be really huge and the price of memory saved by TPS is easily worth the extra buck for ESX licenses.

In the paragraphs above I think I made clear that there is no reason to NOT use TPS unless for specific applications. The only reason left for some people to not use TPS is that if you just keep on filling your host with VMs, it will soon start swapping (which is the bad form of overcommit) and they’re absolutely right. But may I ask this question: “Don’t you monitor what you are doing?”.

When I have a one liter bottle and I want to fill it with water, while filling it I usually keep an eye on (monitor) how much water I already pored into it and stop just before it’s full. I think this same practice can be used in many places, even in IT infrastructures.

Number of users on your Citrix hosts, I bet you monitor performance and start adding more hosts when certain limits will be reached. Or adding data to your disks, I bet you daily check to see if your disks aren’t near their limit. Creating snapshots of VMs in your virtual infrastructure, check your datastore if these snapshots aren’t filling up your space and please, do tell me you keep a sharp eye on those thin provisioned disk. Now, if you do all that and consider those techniques as save, I can’t see why overcommitment would be dangerous. Just monitor !!!

– There is no danger, no hidden risks, just as long as you monitor what you are doing.

I would to thank my twitter friends how promptly responded with esxtop screenshots when I called out for help on twitter. Thanks guys.

And a big thank you to Duncan and Scott for providing great posts which helped me put together this post. Thanks.