Last week I was finally ably to buy the whiteboxes I wanted for my homelab. Untill then I had one ESX host at home that hosted my basic environment but because of that I couldn’t try other hypervisors they way I wanted to. So I decided to add two more hosts to my lab.

This is what I bought:

* The 640GB harddisk is way to much since I already have a 1TB Iomega StorCenter X2, but the 640GB was only 10 Euro more expensive then a 80GB harddisk.

* The onboard 1GB nic will only work during PXE boot. It will not work once ESX is running, so you need to get extra Nics.

* Be carefull when selecting the barebone. Check the memory configuration. I made the mistake of first selecting the older P5-G41 and it could only hold a max 2 double sides DIMMS which limited the choice in memory and would make 8GB cost me almost 400 Euro. Now with the P5G45 I can use almost any type and payed 80 Euro for 8GB. So, check the ASUS site for compatible memory on the mainboard you choose.

Now I have this lab running I have quit some things on my whish list. I want to test performance differences between with and without Jumbo frames, different storage setups, Hyper-V, XenServer 5.5, disaster recovery scenario’s, new backup tooling I’ve seen from Veeam Â / esXpress / vizioncore, etc, etc, etc. Still there are only 24hrs in a day.

Well, first job will be to clean up the mess I made by just unpacking the hosts and connecting them. See picture :-) 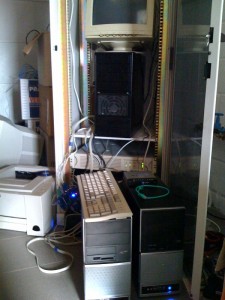