Ever had it happen in your environment? Committing a snapshot on a VM fails and you can’t get your VM to boot again because there are disks missing. This could happen because when initiating Delete or DeleteAll snapshots, the snapshot details are deleted from Snapshot Manager, then the snapshot files are consolidated and merged to another snapshot file or to the virtual machine parent disk. If the consolidation fails, there were no snapshots shown in the Snapshot Manager, but the snapshot files were still being used on the datastore. This can cause the datastore to run out of space.

Unfortunately today this happened for me too, but it has been the first time this happened in a vSphere 5 environment. And therefore it was also the first time I noticed a new feature in VMware vSphere 5 / vCenter 5: “consolidate snapshots”. When a VM has snaphots present on the datastore but they don’t seem to be linked to the VM anymore, vSphere 5 will detect this and report an error on the summary tab: “Virtual machine disks consolidation is needed”. 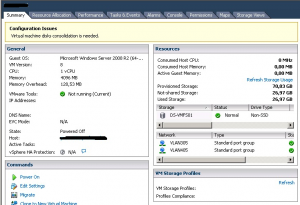 I quickly found there is a new option now under the snapshot menu. Right click the VM, select Snapshot and select the new option “Consolidate”. Now vSphere will start a new consolidation. 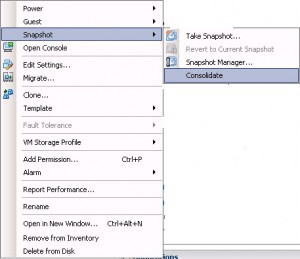 A great new option that probably can save quite some work for vSphere admins. See these KB’s for more info:

Unfortunately in my case, this didn’t work and I immediately got a general I/O error, even though the datastore had enough space left. I eventually had to revert to my last Veeam backup because that was more recent that going back in time to the day the snapshot was made.