As you’ve read by now I’m making my first steps into vCloud Director 5.1 and stumble across some simple things. One of these is the quest on how to create a multi VM vApp template. Had been searching for this and was afraid it wasn’t even possible, but luckily it is possible, you just have to look where you don’t expect it to be :-)

What I wanted is a vApp with a two Ubuntu VMs in a single vApp template. One will function as LDAP Server and one as Zimbra Server. A vCloud user can then select the vApp template from the catalog and instantly deploy a small Mail environment. So I went into the Cloud Catalog and created a vApp template. But when running through the wizard you can only select a single VM to be imported from your non-vCloud vSphere environment. Even after the vApp Template is created, you can’t add another VM to it. (See both Screenshots) 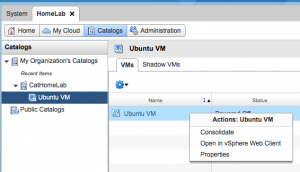 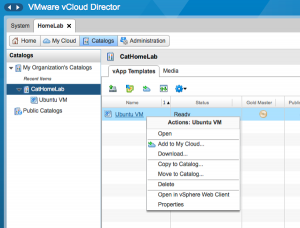 The solution however is very simple, you just have to know it. First import both VMs as single VMs into single vApp Templates into your catalog. Then create a new vApp from the first vApp Template. Next add the second VM to this vApp. Make sure the vApp is shutdown and then right click and choose “Add to catalog”. A small wizard will ask you for a name for this vApp template and you’re done. Thank you Chris Colotti for your tips! Visit his blog ChrisColotti.us for more in-depth vCloud stuff. 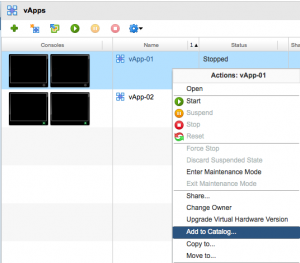