See the following design that is based on the design created in the first post. The shaded part will be added in this blogpost. 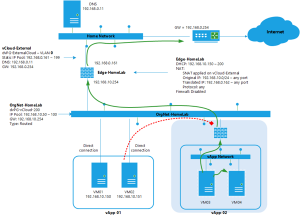 To create a vApp Network you’ll have to create a vApp first. I have created a Cloud named “HomeLab” and from there I click “My Cloud” and create a new vApp by pressing the “Build new vApp….” button. This starts a wizard which first asks you for the vApp name, in my case “vApp-02”. Next I add the “Ubuntu VM” from my catalog twice because I want two VMs. In “Configure Resources” I name the VMs “Ubuntu 03” and “Ubuntu 04”, next I configure the virtual machines by renaming the computer names to “Ubuntu 03” and “Ubuntu 04”. Now the interesting part is when you select the network type for each virtual machine. 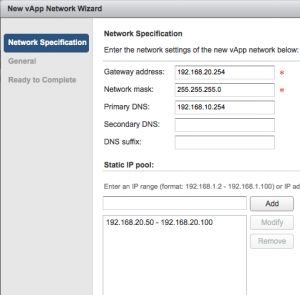 When back at the virtual machine options, the IP assignment options are available.

Select “Static IP Pool” to automatically create a NAT rule which will automatically map the interface to an external IP. The strange thing is that if you want to use DHCP, no NAT rule will be created right now and you can’t create this NAT rule later on when trying to change the vApp networking. See the following screenshot for the error that shows when trying to create the NAT rule:

After selecting “Static IP Pool” assignment for the networks of the VMs continue to the next step “Configure Networking”. This is where the vApp network is connected to the organizational network by selecting “OrgNet-HomeLab”. Enable “NAT” and “Firewall” as options. That’s it, the wizard is finished now. In the vSphere Client the tasks show how the VMs are cloned for your vApp.

To double check what the vApp wizard created open the vApp and see the three tabs “vApp Diagram”, “virtual machines” and “Networking”. Go to the networking tab, see the “AppNet-vApp-02” network and right click and choose “Configure Services”. You’ll now see the DHCP tab and see the DHCP is not enabled. Use this DHCP “server” only to give out IP addresses to VMs inside the vApp that will NOT use NAT translation! Next tab is the firewall and it will show “Enabled” and have a rule that allows all outbound traffic. There is no need to change this.

On the “NAT” tab you should see both VM Interfaces with a mapping mode of “Automatically Mapped to” and External IP is “Pending”. As soon as the vApp is running you will see External IPs used in the NAT translation. After making changes in these tabs and clicking OK, you should not forget to press “APPLY” !!!

Now start the vApp and see if everything works. In the vCenter tasks you immediately see how the vShield Edge appliance is deployed namen “vse-AppNet-vApp-02(something something) and the reconfiguration of the VMs and power on action of the VMs. 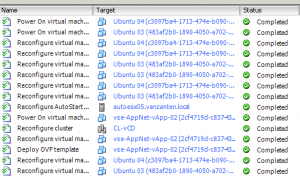 After the vApp has started and the VMs are running, the internet to external IP mapping is shown on the virtual machines tab of the vApp.

The ultimate test of course is to logon to the VM and see which addresses are pingable and if internet access is working. I logged into ubuntu 03 VM who has IP address 192.168.20.51. Tests performed: 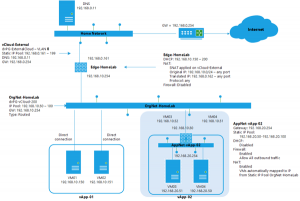 What I was struggling with was the question why the vShield Edge needs so many external IP addresses. If you go to the OrgVDC-HomeLab properties and check the Edge Gateway External IP allocations and the OrgVDC Network IP Allocations you’ll see that it is eating away addresses from the static IP pools, where I would have expected that each Edge would have just one external IP and use that for NAT translations. 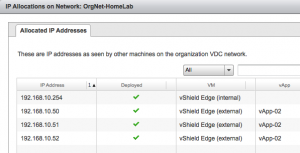 But when thinking of this now, I understand that with just one external IP it would become very difficult to make multiple websites within for example one vApp, accessible from the outside. You would than need the extra external IP addresses to make the port forwarding possible. So the way vCloud works is that it allocates all these addresses up front to avoid any confusion. Right???

If any of the vCloud Networking Guru’s has something to add or would like to explain some more, be my guest…..

Overview of this VMware vCloud 5.1 Networking for dummies: